A downloadable game for Windows, macOS, Linux, and Android

Sequence: Chapter 1: The Prebiotic Soup is a video game, started in May 2016, made to explore the concept of spatial discourse and propagation through its delineations ('emergence'). It is, in its text and design, a reading of The Storm in the Computer, the first chapter of Manuel DeLanda's 2011 text Philosophy and Simulation: The Emergence of Synthetic Reason. The game strives to reify the fundamental concepts of DeLanda's text into a more experientially accessible form, and so is important, as the concepts are necessary for any consciousness-relevant construction of reality. To this end, the game relies on an evolution structure to simulate free energy (entropy) and chaotic decay of the environment. Parallels run along the metaphors of the piece’s concept, as would be fitting, through the hard and social sciences to the individual in their own moment and back around again by simulating the approach to, and transcendence of, a boundary condition. The fundamental goals of the game’s player are exploration and meditation. Interaction with the others, called ‘particles’, moves the player and particles through non-hierarchical evolutionary states in an active probability simulation. From a central zero, each actor through their interactions with others can evolve positively through a dark space, or evolve negatively through an inverse light space – with appropriate complexity, each path approaches a singular conclusion (Fig. 4). The horizon of chaotic decay approaches quickly, however; one would do well to explore with purpose. A second chapter, should one come to pass, would continue our interpretations of DeLanda’s thought process through the text into the realms of cellular automata, genetic algorithm, and on to the simple organism.

Sequence: Chapter 1 was selected by the Canadian Game Studies Association and presented at their 2017 conference in Toronto, Ontario, Canada on the grounds that the game effectively demonstrates an alternative to the traditional written paper in conveying its concept.

It is our hope that this piece may aid one in increasing their understanding of themselves and everything that surrounds and composes them. 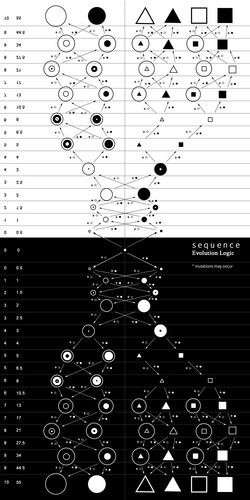